It was at the Victory 2004 Campaign Rally in Florida (seen in photo above) where I was one of the “enthusiastic supporters” President and Mrs. Bush were waving to, as noted in the newspaper photo caption. I’m the girl holding up her camera, partially visible in the photo amongst the crowd. In case it’s hard to spot me, the photo with arrows below points out my head and camera.

Below is another photograph from the event on a newspaper’s website (the highest quality copy I could find in 2004). The arrow points out my face.

My enthusiasm and love for President George W. Bush was so great that in 2008 I even created and produced a video titled “Letter to President Bush” highlighting his leadership, Christian faith, pro-life beliefs, bravery and compassion, using news footage I recorded from TV while chronicling his Presidency in real time. You can watch the videos here.

So how did my enthusiasm for President George W. Bush start? While in Hawaii as a teenager, I remember hearing George W. Bush’s voice on the radio, where I learned he was running for the Republican nomination for the 2000 Presidential race. If there was such a thing as love at first hearing over the radio for a political candidate, this was it. Maybe because I’m a conservative at heart, or maybe because of the comfort during my childhood of knowing George H. W. Bush was President, and before that, Vice President to Ronald Reagan. Comfortable and familiar. I just felt in my heart this man was the man for the job. Also having a stronger love my country, I was starting to realize the importance and impact of leadership for a country and it’s people.

My zeal and enthusiasm could be compared to Michael J. Fox’s character Alex’s love for President Ronald Reagan on the hit 1980’s TV sitcom Family Ties. I didn’t always understand it and am sure some even found it sweet or amusing. Living in Hawaii for a few years, so far from the mainland of the United States, helped cultivate a greater love for my country and fan the flame of patriotism. I was suddenly passionate about politics – or at least for George W. Bush to be president.

My family and I moved back to Florida in early 2001, right before the tragic attacks of 911. Suddenly the whole country was very patriotic and united. People put aside differences to love and protect America. Wish kids could see a united and patriotic America today. The words of President George W. Bush helped bring comfort and hope. After only nine months in office, he faced one of the most tragic events in America’s history and one of the greatest challenges on how to help and protect America and what decisive action to take. My admiration for the brave men and women who stepped forward to defend and protect America through the military.

While in Florida, God blessed me with the opportunity to meet Governor Jeb Bush twice. First at the Bush-Giuliani “48 Hours to Victory Rally” with Governor Jeb Bush and Former New York Mayor Rudy Giuliani on Sunday Nov. 3rd, 2002. He was nice and let me get a photo with him. At another event, got another photo with him. I let him know that I was praying for him and his family, for which he gratefully thanked me.

It was a dream of mine to meet President George W. Bush, whom I greatly respected and admired.

The first two chances though would slip through my fingers…

God opened the door for me to work at a wonderful Christian Ministry’s television department. Debbie, the Executive Producer, a wonderful mentor and friend whom I respect and admire, had hired me after the ministry created a position for me. Thankful to God for favor and wonderful people! A great mentor and dear friend, Jerry Newcombe, the Senior Producer at the ministry, invited a great producer John and me to attend a special nearby afternoon event with the Secretary of Education. Within months, all three of us were invited to a human trafficking conference in Tampa, Florida, held by the Department of Justice. My invitation said, “Your name has been provided by the White House.” We received the invitation a week in advance of the event and a RSVP was needed the day after receiving the invitation. All expenses would be paid for travel and hotel. Since I just started working there as a full time paid employee, I wasn’t sure I should ask to take the time off to attend. (Not sure I even asked about the possibility?) So because of that and some other reasons, I declined to go on the trip. Little did I know the invitation was withholding a secret – that President George W. Bush would be speaking. My friends came back with stories of shaking his hand at the conference. I was so disappointed and had the emphathy of many in the office who knew I loved the President.

Not too long after that, I would be given another chance. A great mentor and dear friend Susie, who also worked at the ministry and helped train me, found out another co-worker and family were heading to President George W. Bush’s big campaign rally in Miami. She arranged for me to accompany them. My part of the crowd was a definite cheering section for the President. So it wasn’t a surprise that after the speech ended, President George W. Bush came straight to our section to shake hands. Unfortunately I was trying to predict where he would go so I had already rushed away to the side and just missed him!

Meeting President George W. Bush would have to remain a dream and prayer for the time being.

But I would be given a chance to meet another President, George H. W. Bush, which would leave me a little grateful but also stunned.

To be continued in Part 2…

Soul Check TV exists to be a positive influence in the world, share the Gospel and encourage believers in their walk with Christ!

Watch Soul Check TV on NRBTV DirecTV Channel 378 & affiliate stations! Please check NRBTV for scheduling! You can also watch the show during airtime on NRBTV’s website. Plus, watch episodes here on our website. Please click on the menu below to select an episode.
Thanks so much for watching! 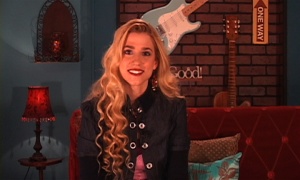